The panel headed by retired Justice Doris Okuwobi gave out the cheques while delivering ruling on six petitions filed before it.

Four of the petitions were found credible by the panel while two others petitioners, the panel held, failed to prove their cases successfully.

Those who got compensated are: Tolulope Aminat Openiyi, who got N10 million, Felicia Okpara, got an award of N750,000, Tella Adesanya got N500,000 and Blessing Omorogie Esanbor, who got N5 million compensation. 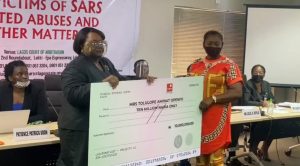 Those whose petitions were refused and recommended for further investigation by the police are: France Eni Idum and Oladoyin Ademola.

The panel in it decision on Tolulope Openiyi’s petition, found that she successfully proved that her husband, Olusegun was shot dead in August 2017, by a police officer, Jide Akinola, attached to the Sabo, Yaba police station.

The panel found that there was no contrary evidence offered by the police to her testimony that her husband was shot at a police checkpoint. The panel also found that though the police authorities arrested the erring police officer, his investigation was not properly conducted as he was later released.

The panel therefore recommended the prosecution of the police officer. The panel also recommended scholarship for one child of the victim.

Other general recommendations made by the panel include, public condemnation and immediate sanctioning of police officers where necessary and an adequate and speedy compensation of victims and their families with the cost of compensation to be set aside by the Nigerian Government for the police.

Felicia Opara is a young woman who was captured in a viral video of October 12, 2020 showing alleged assault by some police officers in the Ojuelegba area of Lagos. 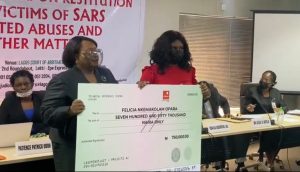 Among other things, the panel found that the culture of impunity and violence is rampant among some police officers in Nigeria. The panel also found that there is sometimes an inability of the authorities to bring perpetrators of torture to book. 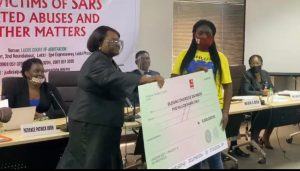 Esanbor was compensated with the sum of N5m.

The panel found that though her police assailant, Emmanuel Okujor was imprisoned for 17 years for the offence, the petitioner still has a permanent disability and requires plastic surgery to fix her face.

Adesanya, an officer of Nigerian Agricultural Quarantine Services under the Ministry of Agriculture, was awarded N500,000 compensation for his unlawful arrest for three days, the seizure of his car since 2018 till date, extortion and for the trauma he suffered at the hands of the police officers. 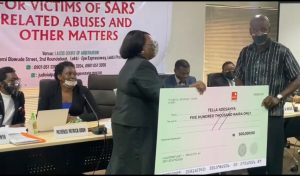 The panel also recommended the release of his car immediately.

However, the petition of Francis Idum, who was alleged to be a victim of extrajudicial killing by a SARS officer during a cult clash, sometime in July, 2019, was dismissed.

Witnesses who testified in the petition filed by family members of the deceased claimed police officers from Area F police command also took away his body.

In reaching its decision, the panel found that none of the witnesses who testified was an eye witness to the incident as they could not give direct evidence of the person who shot the deceased.

The panel also found that the evidence of the police on its movement of arms register for the day showed that only AK47 rifles were signed out for use and not a pistol as was allegedly used on the victim.

In the final analysis the panel recalled that the fact that there was a cult clash on the day and the balance of probability and the preponderance of evidence tilted more in favor of the police. The panel was therefore unable to recommend compensation for the petitioner as it was not proved that the gunshot which caused his death was a weapon handled by the police.

The panel however recommended that the police conducts further and better investigation by commissioning an independent outfit vested with the mandate to unravel the circumstances that lead to the death of the petitioner.

On the petition filed by Oladoyin Ademola, the panel was also unable to recommend monetary compensation.

The panel held that the petitioner did not connect the cataract he suffers in his eye to acts of assault allegedly perpetrated on him by men of the Nigerian police. The panel however recommended that the DPO and officers at the Dopemu check point and police station as at the date of the incident ought to be investigated.

Tolulope Openiyi had told the panel, while testifying, that her husband, Olusegun Openiyi was shot by one Sergeant Jide Akintola (force number 32405) in August 2007.

Tolulope narrated that her husband who worked with Celtel, (now Airtel) was shot on his way back from an official outing in UNILAG.

She said the police officer shot her husband’s official car tyre and forced the door open before shooting Olusegun by the left side of his chest.

She also said her kids are out of school as she can no longer afford the fees and she faces a quit notice to move out of her rented apartment.

Felicia Okpara in her petition told the panel that she was arrested and beaten up by police during the #EndSARS protest.

Okpara claimed that she had just concluded an interview in the area and was heading back home when she saw the protest in the Surulere area of Lagos State decided to join.

She stated that shortly after, she heard gunshots and people started scampering for safety.

According to her, after running towards a police station, she decided to record the incident but was accosted by a police officer who asked why she was recording and ordered her to stop.

Okpara testified that she refused the order and the said officer pulled out a gun on her while another joined in and both forcefully dragged her and another lady to the police station nearby.

She alleged that when they got to the police station several officers including women started beating and punching them which led to her losing control and urinated on herself.

Plane With 180 People On Board Crashes In Iran

IPPIS: ASUU Threatens `No Pay, No Work’ As FG Plans To Stop Salaries

3 To Die By Hanging Over Osun Bank Robbery