A U.S. airstrike killed Iranian Quds Force commander Qasem Soleimani in Baghdad late Thursday, the Pentagon said, a dramatic escalation of tensions between the two countries that could lead to widespread violence in the region and beyond.

Defense Secretary Mark T. Esper said the Pentagon had taken “decisive defensive action” against Soleimani, the revered military figure who had close links to a network of armed groups backed by Iran across the Middle East and, according to the United States, bore responsibility for hundreds of American deaths.

“Gen. Soleimani was actively developing plans to attack American diplomats and service members in Iraq and throughout the region,” Esper said in a statement. “This strike was aimed at deterring future Iranian attack plans.” 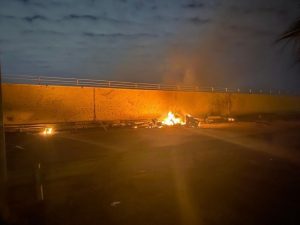 In a statement, Iraqi Prime Minister Adel Abdul Mahdi condemned the U.S. “assassination,” adding that the killing of the Iraqi militia leader was an act of aggression against Iraq and a breach of the conditions under which American forces operate in the country.

A U.S. official, who like others spoke on the condition of anonymity because he was not authorized to comment on the record, said the attack was conducted by a U.S. drone and struck a two-car convoy carrying Soleimani and others on an access road near Baghdad International Airport.

At least half a dozen people were believed to have been killed.

Senior officials with the Popular Mobilization Forces, as the Iraqi militia groups are known, lamented the deaths in messages circulating on WhatsApp.

“May God reward you for the loss of the brave leaders, Hajj Soleimani and Hajj Muhandis. May God accept them as martyrs in his vast mercy,” wrote Ahmed al-Assadi, the chief spokesman of the Popular Mobilization Forces, many of which are seen as being funded and directed by Iran.

Despite a long period of increasing tension between Iran and the Trump administration, which has vowed a tougher stance on Tehran’s support for proxy groups, the attack against an incomparable figure in Iran’s security establishment came as a surprise to many analysts, in part because it was seen as likely to ignite a significant Iranian response.

Ilan Goldenberg, who worked on Middle East issues during the Obama administration, characterized the move as a “massive game changer” in the region.

“Iran will seek revenge. It may escalate in Iraq, Lebanon, the gulf or elsewhere. It may attempt to target senior U.S. officials,” said Goldenberg, now a scholar with the Center for a New American Security.

“Unfortunately, I highly doubt the Trump administration has thought out the next step or knows what to do now to avoid a regional war.”

The attack, which Esper said was authorized by President Trump, raises fresh questions about the president’s approach to the Middle East.

While Trump has employed bellicose rhetoric and authorized several strikes against the Syrian government, an ally of Tehran, he has repeatedly voiced his desire to get the United States out of costly wars in the region.

The attack appeared intended to cripple a force that has been the vanguard of Iran’s decades-long effort to shape events in the Middle East in its favor.

Soleimani, who rose from poverty in southeast Iran, joined the Revolutionary Guard Corps as a young man, and later took control of the Quds Force, its external wing, in the late 1990s.

Under his command, the force expanded its support for armed groups across the region, including in Iraq, where U.S. officials blamed Iran-backed militias for killing at least 600 American troops following the 2003 U.S. invasion.

The force also was named in a 2011 plot to assassinate a Saudi diplomat at a Washington restaurant.

But after the Islamic State took over vast swaths of Iraq in 2014, Iraqi militias linked to Soleimani were temporarily aligned with U.S. counterterrorism objectives in Iraq as they played an important role in defending Baghdad and eventually crushing the militant group’s grip on Iraqi cities and towns.

“Soleimani was a popular figure in Iran, and more importantly, was their key instrument used to project power in the region,” said Marc Polymeropoulos, a former CIA official with extensive counterterrorism experience overseas who retired this year.

“For the legitimacy of the Iranian regime, a forceful response against the U.S. should be expected.

The American public needs to understand that we may lose American lives after this act.”

The congressional response to the strike, with few exceptions, was split along party lines, with leading Republicans cheering Trump for decisively meting out “justice” against Iran while leading Democrats warned that the “disproportionate” strike would lead to an “almost inevitable escalation.”

Thursday’s airstrike appears to have been set in motion by a December 27 rocket attack that killed a U.S. contractor on a base in the Iraqi city of Kirkuk, an assault the Pentagon blamed on Kataib Hezbollah, an Iraq militant group.

There was pandemonium at the Satalite Area of Lagos at the weekend as a Navy personnel stabbed an ...

The presidential candidates of the Labour Party (LP) Peter Obi has released its manifesto tagged ...

Vincent Aboubakar headed in a Stoppage-time winner and was then sent off as Cameroon claimed a ...