Flights at Dubai International Airport were delayed on Saturday with some cancellations due to flooding.

“Dubai Airports can confirm that due to heavy rainfall and flooding earlier today, Dubai International (DXB) is experiencing operational disruptions,” an official said.

“We are working closely with our service partners to get back to full operations as soon as possible. 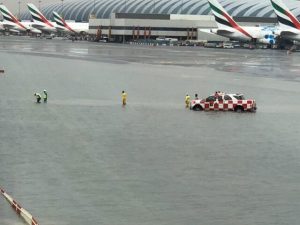 “However flight delays are expected to continue through the day with some cancellations and diversions to Dubai World Central (DWC).” 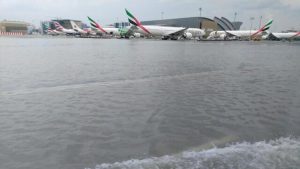 Passengers were asked to check revised times with airlines and budget sufficient time to reach the airport.

The Roads and Transport Authority urged residents to use the metro in Dubai to avoid traffic snarls as commuters reported being stranded on the roads for hours.

The Dubai Media Office tweeted that “ponds” had formed in some areas due to “unusually heavy rain” of 150mm an hour for more than two hours.

The National Centre of Meteorology sent out an alert warning residents to be extremely vigilant.

The centre forecast “hazardous weather events of exceptional severity” throughout the day with thunder, heavy rain in the Northern Emirates and eastern areas.

“Freezing rain” was expected in the mountain areas and rainfall would continue over the next two days, the centre said. 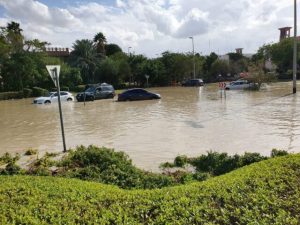 Chilly temperatures will persist across the country with the mercury expected to dip 4 to 6 degrees lower through the week.

Mountain areas such as Jebel Jais will have minimum temperatures as low as 0°C, internal areas will range between 9°C to 14°C and coastal areas will stay at 10°C to 15°C.

“We are expecting freezing rain and freezing of accumulated water in the mountains,” said an official with the meteorological centre.

“The main warning is now over the sea with strong north westerly winds over the Arabian Gulf and the Oman sea.”

Wind speeds in the Arabian Gulf were at 30 knots with waves up to 12 feet.

Rainfall is expected to continue on Sunday across northern, eastern and southern areas from Ras Al Khaimah, Al Ain to Asab.

UAE residents such as Antonio Abreu woke up to find the water levels rising in the parking areas near his home in Discovery Gardens and shifted his vehicle to safer ground at the Ibn Battuta mall nearby.

“Many cars are stuck. I managed to take my car out and moved the car slowly so as not to get water in the engine because it is almost like a river in some parts,” he said.

“This happens every year here when there is heavy rain. I hope they finally will solve this flooding problem.”

Some sites such as Global Village announced they would stay shut for the day until conditions improved.

The Lagos State government has cleared five Dowen College students and five employees of the school ...

The Supreme Court has set aside the conviction and 30 days jail term imposed on a senior lawyer, ...

Former Minister of Aviation, Femi Fani-Kayode is currently in the custody of the Economic and ...