Joshua Knocks Out Pulev After Ninth Round To Retain World Titles

British-Nigerian boxer, Anthony Joshua, knocked out Bulgarian boxer, Kubrat Pulev, in the ninth round of their world title bout at the SSE Arena, Wembley, to retain his WBA (Super), IBF, WBO, and IBO heavyweight titles.

The fight is Joshua’s first since reclaiming his belts from Andy Ruiz in December 2019 in Saudi Arabia.

Bothe boxers were cautious in the first two rounds with Joshua using more of his jabs. 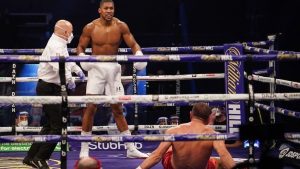 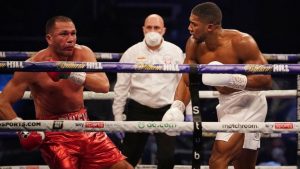 Pulev has been unbeaten in his last eight fights since losing via knockout to Wladimir Klitschko in 2014. The 39-year-old won 28 of his previous 29 with 14 by way of knockout.

South African referee Deon Dwarte stopped the fight after the ninth round knock down. 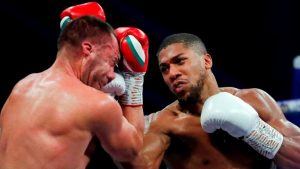 Both fighters come into the bout with one loss apiece. Joshua lost his only fight in a shocking defeat to Andy Ruiz in 2019 while Pulev’s only loss was a fifth round knockout loss in the hands of Wladimir Klitschko in 2014.

Joshua barely broke eye contact with his challenger from the moment he strode over the top rope and into the ring, then their pre-fight fist bump was aggressive and intense.

When the punches began flying, Joshua landed a series of jabs and Pulev clipped him back with a left hook.

When Joshua let his hands go for the first time with a four-punch salvo in the second round, Pulev smiled sarcastically back at him.

Joshua smashed Pulev with a perfectly-timed right hand in the third round that badly hurt his challenger.

Joshua hunted him, desperate for the knockout, and landed a brutal barrage of uppercuts and hooks which eventually toppled Pulev to the canvas. 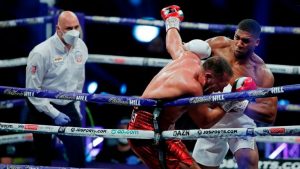 It seemed likely to be all over but Pulev, whose only previous loss in 29 fights was against Wladimir Klitschko, survived to the bell after which he threw an illegal shot that fizzed past the champion’s face.

Joshua, eyes bulging and tongue out, stared a hole through Pulev and spoke to him as the next round was set to begin.

He regained his composure and, in the fifth, cracked home a big right hand which didn’t budge Pulev, who ended the round strongly after some feisty back-and-forth trash talk.

A spiteful fight became gritty and rugged in the sixth when Pulev began winging wild swings that didn’t hit their target, but did force ugly exchanges.

Three consecutive uppercuts from Joshua hurt Pulev in the seventh but still the tough Bulgarian would not cede ground.
Pulev then landed his best punch, a straight right hand, in the eighth.

But Joshua closed the show in the ninth with another colossal uppercut which crumpled Pulev to the floor for the second time.

Still Pulev rose but a right hand from Joshua sent him flying backwards and split his lip bloodily, ending the fight in a flash.

Okolie knocked down his opponent twice in the first round, forcing the referee to call off the fight in the 1:45 minute after his second round knockdown of Jezewski.

Okolie is on course for a WBO cruiserweight title fight next year.
Meanwhile, Joshua has set up a potential all-British world heavyweight unification bout against Tyson Fury after knocking out Bulgaria’s Kubrat Pulev at London’s Wembley Arena on Saturday.

The much-anticipated clash with Fury is expected to take place in 2021.

In a post-match interview monitored by our correspondent, Joshua said he is determined to beat Fury to win the world heavyweight unification bout.

Joshua, who said his next target is Tyson Fury, expressed confidence in his boxing ability.

The Nigerian-British fighter added, “Whoever has got the belt, I want the belt. If that is Tyson Fury, let it be!”

When asked about Saturday’s match, he said, “Less talk, more action. I hope everyone was satisfied tonight.

“For me, I stuck to what I know best, boxing. You ask the crowd what they want to see!”

Joshua could have outclassed Pulev, who had lost just once previously in his career to Wladimir Klitschko in 2014, in the third rounds.

Joshua gave his opponent three successive uppercuts in the ninth round to take his career record to 24-1.

Judge Threatens To Revoke For Ize-Iyamu, Others Bail