A reporter at PREMIUM TIMES, Azeezat Adedigba, has been named the winner of the 2019 Female Reporters Leadership Program (FRLP) organised by Wole Soyinka Centre for Investigative Journalism (WSCIJ).

The runner up at the WSCIJ FRLP awards was Channels Television’s Shola Soyele, whose report focused on “Forced Child Marriages and the legal gaps”.

Her report explored how a lack of education especially of the girl child, fuels the menace of child brides and thereby prolongs and compounds insecurity in Nigeria 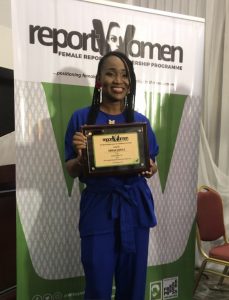 Soyele, a lawyer called to the Nigerian Bar, currently works as a Supervising Reporter and the Judiciary Correspondent at Channels Television.

She is also the Producer & Presenter of Law Weekly, a 25mins programme on Channels television which takes an in-depth look at judicial activities across Nigeria with a special focus on how the law affects both the socio and economic fabric of the country.

She has also won other awards at her job including a Nigerian Bar Association Merit Award for her contribution to the growth of law and the legal profession.

She was recently named the Best Media Law Personality at the 2019 Nigerian Legal Awards. She won the same award in 2016.

In 2014, she also bagged the TV Presenter of the Year Award in the prestigious only-female Exquisite Lady of the Year, (Eloy) Awards.

While the 2nd runner up, Theresa Igomu, a reporter with The Sun Newspapers, wrote on the trauma rape victims face in Nigeria.

The awards, which followed a six-month-long leadership training programme for 20 female reporters from Nigeria and Ghana, had 20 entries from all the Fellows of the programme.

The winning story, published on PREMIUM TIMES in October, focused on the health risks associated with the use of firewood. 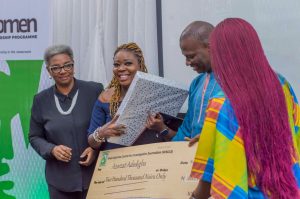 The story shed light on how 93,000 women and children die annually from smoke inhaled during the use of firewood as a means of cooking.

Ms Adedigba, a graduate of the University of Jos, covers the education and labour beats for PREMIUM TIMES.

Stories by other fellows ranged from environmental issues like gas flaring and oil pollution and how they affect women and children, to the economic struggle, cultural, religious and health issues facing women and children in Nigeria.

The inducted Fellows who will now become part of the Report Women Network (REWoN) were admonished by the Executive Director/ CEO of the centre, Motunrayo Alaka, to go ahead and implement their training in their various newsrooms to effect positive change.

Mrs Alaka said that the Fellows can now go back to their newsrooms to occupy leadership positions not just because they are women, but also because they are capable and confident professionals who have all it takes to perform in such capacities.

The resource persons for the FRLP, represented by Lekan Otufodurin, the Executive Director of Media Career Development, also admonished the Fellows to always “put on their gender lenses” when reporting issues so as to properly balance media coverage on issues. 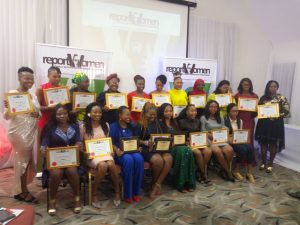 All The WSCIJ Fellows

According to the organisers, the programme had produced a total of 33 Fellows from two previous batches. The 20 Fellows for 2019 were selected from a pool of 207 applicants from nine countries, including Nigeria, Togo, Tanzania, Ghana, Malawi, Uganda, Botswana, India and South Africa.

The Fellowship programme is aimed at changing the face of reporting and leadership in the newsrooms to be as female as they are male.