A group of persons living with disabilities on Wednesday afternoon shut down Oba Akinjobi Way, Ikeja, Lagos, including the premises of the Lagos High Court over a N9 million judgement debt.

The Judgement debt was paid by musicians- P-Square to the Registrar of the High Court in favour of disabled person, Patrick Arueze but which disappeared from court records.

As at the time of going to the press, the disabled persons under the aegis of People Living With Disabilities in Lagos were still sitting on the road, being persuaded by the police to meet with the State Commissioner of Police, Mr Hakeem Odumosu. 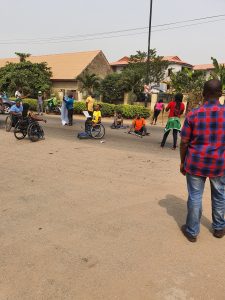 “I am ready to die here today,” says Arueze who apparently is at his tetters end of the tragedy that made him and his fellows got to the extreme end of blocking the gateway to Ikeja GRA.

According to him, he obtained a judgement of an Edo State High Court, Benin-City against a musical group, P-Square in 2016 of a failed contract.

He had contracted the group for a musical concert in Benin City but the group failed to honour. He therefore sued the group to court for breach of contract.

Not satisfied with the court’s judgement, P-Square approached the Court of Appeal, Benin Division  where Justice Moore Aseimo Abraham Adumein in his lead judgment dismissed the appeal.

Other judges on the Court of Appeal panel are: Justices Samuel Oseji, and Mudashiru Oniyangi concurred with the judgement.

In an attempt to levy execution, and because the judgement debtors reside in Lagos, the judgement creditor, Arueze filed a judgment execution application before Justice Kazeem Alogba (now the Chief Judge).

The application was approved and recorded as judgment of the High Court of Lagos.

The bailiffs of the court thereafter levied execution on the judgement debtor who gave a post dated cheque in lieu over the debt.

Arueze claimed that since the bailiffs collected the cheque which was written in the name of the Chief Registrar’s, he has not been paid. “It is come today, come tomorrow,” he said.

The judgement creditor was even more pained because he had an accident which crippled him, which happened in the course of the trial.

He insisted that they have been deceiving him for four years and he no longer has anywhere to go.

“This is why I brought by colleagues here today. It is either they pay me my money or I die here today, “he said.

Arueze believed that Lagos judiciary officers compromised on his case. “I was in their office (bailiffs) after the execution and saw them fighting over money.

“It is this same Chief Judge, Justice Alogba, who as number three then granted my application. I am pleading with him please tell his people to pay me my money, “ he said.

Gavel International investigations revealed that two bailiffs involved in the case have been sacked.

In the course of interviewing Arueze, the Chief Registrar, Mrs Taiwo Oladotun came to the kerb that led to the Chief Judge’s office where they sat, and told the journalists to move away.

“I don’t want to see any journalist. This is a private affair and not public. Please move away, “ she said.

After about five minutes she left  Arueze and his colleagues.

Arueze and his colleagues also left the court premises, and moved to the main road. They blocked the road for almost an hour before they were persuaded to attend a meeting with the Lagos State Police Commissioner, Hakeem Odumosu.

Police Arrest Pastor For Faking Own Kidnap In Kaduna

Police Arrest 700 Criminal Suspects, Others In Lagos In 2 Months