Rivers State Governor, Nyesom Wike on Tuesday declared that he is willing to set aside his immunity to testify against persons who violate the state’s border closure regulations aimed at preventing the spread of coronavirus.

Speaking at the office of the Rivers State Commissioner of Police, Mustapha Dandaura in Port Harcourt on Tuesday, following the arrest of two pilots of Carveton Helicopters who illegally transported expatriates to the State, Governor Wike said that the protection of Rivers people is an important assignment that must be executed with the seriousness it deserves.

He said: “I am willing to drop my immunity as a governor as far as this case is concerned. I am ready to be a prosecution witness.”

He charged the police to prosecute the matter to its logical conclusion to serve as deterrent to those interested in violating the regulations of the state regarding the fight against coronavirus.

He said: “I want to say this is a serious matter to us and police should handle it seriously. That’s why I am here at the state command to show the seriousness of this issue.

“Nobody says that you can’t go to any state but now we are in a war situation. This COVID-19 is even worse than a conventional war.

We want to know who are those people you brought in, so that we have to trace them to know their identity and status. Luckily we have seen the pilot and the Co-pilot. They will assist the police to assist in identifying them.” 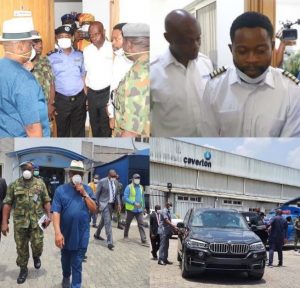 Governor Wike reiterated that though the State Government has no power to close airports, it has the right to check those coming into the state in order to ascertain their status.

“I have always said that we need the support of everybody. Nobody knows the status of those coming into Port Harcourt. Nobody knows whether they are positive or negative . I have said before that I don’t have right to close the airport . But I have the right of saying don’t enter my state because we want to know your status,” he said.

He wondered why Carveton Helicopters decided to cut corners when the State Government outlined the procedure for flying expatriates from Lagos into State.

He said: ” The company wrote to us about bringing people which I forwarded to Commissioner of Police to perform security checks and the health officials to perform their duties before allowing them to come on.That is for those performing essential duties. But they decided to violate the regulations.”

Governor Wike said that his administration is duty-bound to protect Rivers people from coronavirus.

Rivers State Police Commissioner, Mustapha Dandaura said that the command arrested the pilot and co-pilot of Carveton Helicopters who ferried unknown passengers to the State.

He said that the pilots violated the regulations regarding the safety of the state.

He said: “Recall that when this coronavirus issues started , there was ban of local flight from coming into the State. Since that time we have been monitoring the activities of these private airlines.

“To our surprise, we received an intelligence report that an aircraft has landed at the Airforce base and that it was carrying some passengers. We have apprehended the Pilot and the Co-pilot by the NAF commander that’s why they alerted the chief executive Governor of the state who had given an order that on no account should any aircraft land on Rivers State without clearance.

“We don’t know the people they brought. Whether they are positive or negative of Coronavirus. Where they are heading to and where they came from?”

It will be recalled that the Executive Order signed by the Rivers State Governor on March 19, 2020 suspended flights to the Port Harcourt International Airport, Omagwa, Air Force Base and Bonny Airstrip beginning Thursday, March 26, 2020.

The Executive Order signed by Governor Wike is titled: “EXECUTIVE ORDER RVSG – 01 2020 PURSUANT TO SECTIONS 2, 4 AND 8 OF QUARANTINE ACT, CAP. Q2 LAWS OF THE FEDERATION OF NIGERIA 2004 AND REGULATION 11 OF THE QUARANTINE (CORONAVIRUS (COVID-19) AND OTHER INFECTIOUS DISEASES) REGULATIONS,2020.”

Meanwhile, Carveton Helicopters yesterday appealed to the federal government to prevail on the Governor of River State, Mr Nyesom Wike to release its pilots who have been remanded at the Port Harcourt prison.

In a statement yesterday night by Carveton management, the company said:
“ At the start of the COVID -19 lockdown, we received a letter from our client stating that they have been given approval/ exemption to fly and continue operations. We (Carveton along with three other companies) also received approval from the Minister of Aviation to fly only essential services, mainly in the Oil and Gas industry”.

“ Lastly, we got another approval from the Nigeria Civil Aviation Authority (NCAA) to fly for this same oil and gas sector. We have been flying along with these guidelines for the past seven days.”

“Today, we were informed that the Governor of Rivers State, Mr Nyesom Wike was coming to address the operators in Port Harcourt and our people waited. But on arriving, the governor directed two of our pilots to be taken to CID where they were told to write statements.”

“Despite all pleas by our lawyers who showed all the relevant documents, they were taken to the magistrate court and charged. At the court, our lawyers also presented all the documentations approving us to fly by the federal government but the case was closed and the pilots have been remanded in Port Harcourt prison till the 19th May.”

“We appeal to the federal government to urge the Rivers State government to release our pilots who violated no law and are being unduly punished for reasons we still do not understand,” the statement reads.

Justice Abiola Soladoye of the Lagos State Domestic Violence and Sexual Offences Court in Ikeja on ...

Sixteen years after they lost their jobs due to the Banks' re-capitalisation exercise of 2006, the ...